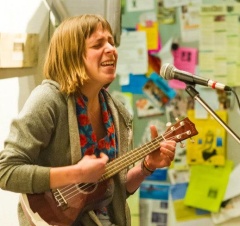 Today’s storyteller relives the day of hail storms, lava caves, and free dairy queen, also known as just another Tuesday on this summer’s cross-country bike trip. The mysteries of Idaho — plus a bonus musical feature set to Ukulele! — captivate the audience from our December 2012 show, When It Rains, It Pours.

Thanks to Ali for helping to put the “spoke” in Spokespeople!

About the storyteller
Ali Dineen hails from New York City, from the beloved borough of Queens, and finished up college last spring at Bard, where she studied art and was fascinated by narrative and its role in our everyday lives. Ali moved out to California in September and has been building sets at a theater, writing sometimes, biking other times, playing music, and eating fruit and ice cream.

One thought on “Podcast #29: Black Tar Beneath Our Wheels”